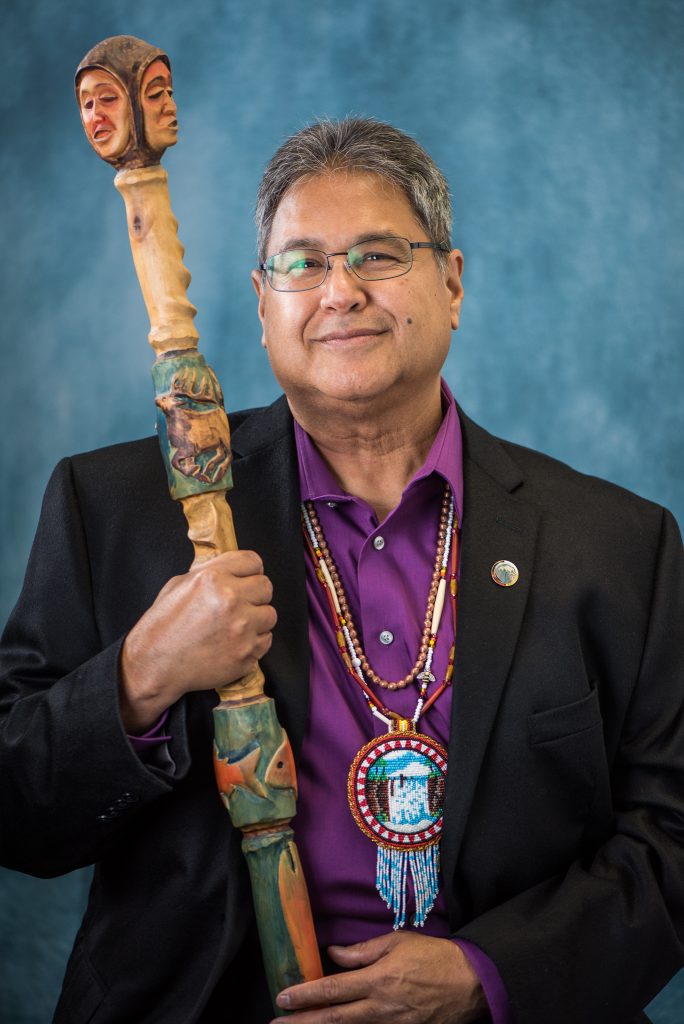 Chief Andy de los Angeles, former Chairman of the Snoqualmie Tribe and nationally
beloved Indigenous civil rights leader, passed on January 21, 2021. Chief Andy de los
Angeles was the child of Juan de los Angeles and Frances Zackuse. On his mother’s side he
was the grand child of Tom Zackuse and Nina Kellogg and the great great-grandchild of
Chief Jim Zackuse and Amelia Brown.

Known affectionately as Chief Andy, he was a compassionate and tireless activist who
dedicated over a half-century of his life to fighting for the rights of all Tribal Nations,
safeguarding their culture and history, and protecting the sacred. Through the
contributions he has made that will long outlive this generation, Chief Andy’s kind and
unwavering voice for truth and justice will never be silenced and will always live on as an
inspiration and call to action.

Chief Andy’s contributions to Indian Country and his beloved Snoqualmie Tribe are
incalculable, and his loss is most dearly felt by his large family and his people. The
Snoqualmie People will always remember Chief Andy as a pivotal historical figure and an
indispensable leader during some of the Tribe’s darkest hours. He was a political, cultural,
spiritual, and social leader of the Tribe, a tender-hearted mentor and teacher to countless
members, a living legend whose incomparable example helped to define what it meant to a
Snoqualmie citizen in the modern world.

Though he freely offered his support and wisdom to any Tribal Nation in need, Chief Andy’s
most passionate crusade was the decades-long, eventually successful fight to force the
federal government to re-recognize the Snoqualmie Tribe as a sovereign Tribal Nation after
decades of attempted erasure. Once that battle was won, Chief Andy re-dedicated himself to
protecting his Tribe’s most sacred ancestral site, Snoqualmie Falls, and helped create an
enormous grassroots movement. Though that struggle is still ongoing, Chief Andy lived to
see it reach a historic turning point in 2019 when the Snoqualmie Tribe finally reclaimed
sacred land around the Falls, stopping proposed developments that would have further
desecrated their sacred site and burial grounds.

Chief Andy dedicated himself to a life of humble and loving service in an incredibly diverse
multitude of selfless jobs and positions. He provided support to those in need at various
times as a Tribal head of state, a civil rights and grassroots environmental leader, a social
worker, a counselor for victims of domestic violence and sexual assault, a teacher, a Tribal
archeologist, and Tribal public affairs newsman who edited newspapers, produced radio
shows, and produced and co-hosted TV shows. A member of the U.S. Commission on Civil
Rights for decades, Chief Andy shared with everyone he met his unshakable faith in the
fundamental goodness of humanity and his inspiring commitment to protecting and
fostering human dignity at every opportunity he could.

In addition to his own Tribe, Chief Andy served many Tribes and Tribal organizations in
their fights for recognition, civil rights, cultural protections, and quality of life, including the
Puyallup Tribe, Lummi Nation, the Duwamish Tribe, the Shoshone Bannock Tribes, United
Indians of All Tribes Foundation, the Small Tribes Organization of Western Washington,
and many others. He was a groundbreaking advocate for enshrining legal protections for
Tribal cultural resources, successfully lobbying for unprecedented cultural resources
policies in Washington State that have influenced policies on Indigenous cultural resources
nationally and internationally – saving countless indispensable, irreplaceable contributions
to the Indigenous heritage of the Americas from otherwise certain destruction.